The Concrete Repairs Limited and Volkerlaser Alliance formed to work on the M5 Oldbury Viaduct was announced as the winner of the Award. It was praised for the genuine collaboration and innovative methodology developed which enabled the sharing of learning, resources, materials and plant allowing the project – the largest concrete repair project ever carried out in the UK – to be delivered on time despite its size and complexity.

Formerly part of the Midland Links Motorway, the M5 Oldbury Viaduct is a 1.8 mile (3.2km) long elevated section to the west of Birmingham. Although considered structurally sound, Highways England realised the need to carry out essential repair work to the concrete decks, deck ends and cross-head beams. 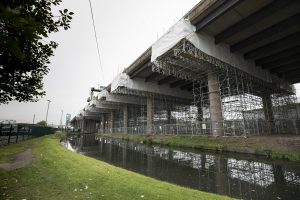 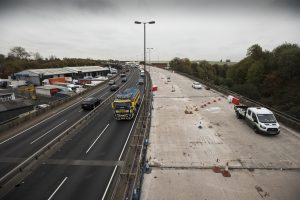 The main challenge presented by the project was the sheer scale of the works, which would require a level of management of the site and the human and mechanical resource within a very tight timescale and at high financial risk.

The repairs spanned the full 3.2km long deck, covering 100,000m2, involving full repairs to 270 deck ends, over 10,000 individual mid span areas and replacement of half a deck as part of a single repair covering 200m2. To achieve this, over 20 million litres of water was used during the hydro-demolition works, over 3 million kilograms (1,250m3) of concrete repair material was utilised and almost 50,000 sacrificial anodes were installed. Over 600 individuals worked on the project, in two full shifts a day, six days per week – meaning the site was working for 18 hours a day.

By forming the Alliance these two large contractors were able to demonstrate the strength, skills and expertise of the two parties coming together, allowing the project to be delivered on time with minimal disruption.

Currall Lewis & Martin Construction was shortlisted for the M6 Bescot Viaduct project. The R185 Concrete Repairs and Cathodic Protection project was awarded to CLM by Kier Highways. It formed an ongoing repair strategy for the Midland Links Motorway Viaducts, which involved the repair of four bents, including two half-joints. The condition of the bents had deteriorated to an extent which meant intervention was essential.

Complex delivery challenges were overcome by outstanding performance coupled with a proactive, innovative and collaborative approach. A robust one-way system and transport plan was designed and implemented to ensure safety between interfaces of working operatives, plant and machinery and office staff and vehicles. The scheme involved working adjacent to 25,000-volt rail lines so careful, collaborative planning and negotiation were critical to achieving the works.

Sika was shortlisted for its Howdon SWT project. The Howdon sewage works in Tyneside is one of the largest sites on England’s east coast, serving more than 1 million homes. For its refurbishment, a fast-setting repairs programme featuring a ‘bacterio-static effect’ solution was required to eliminate signs of corrosion and ensure the facility’s vital concrete infrastructure remained operable.

The project demonstrated how innovative materials can help facilitate the needs of a complex site, while causing minimal disruption during the refurbishment works. It also highlighted best practice for specifying and implementing a repair strategy for the client, to protect their assets for the longest time possible and providing a total corrosion management system rather than a one-off repair. 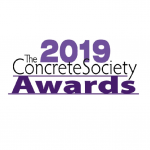 Alliance in partnership with Bridges 2020Issue 16