An existing retail unit in Liverpool One required structural modifications to accommodate the needs of the future tenant, Apple. The company wanted to double the height of the space to create an impressive open entrance area.

This required removing part of the first floor which involved cutting post-tensioned concrete beams and precast slabs. CCL was appointed to perform the modification work required to the post-tensioned beams to accommodate the needs of the client.

CCL analysed the new loadings associated with a new steel mezzanine and steel post support and located the existing post-tensioning tendons which needed to be cut. Concrete was removed at the tendon locations to provide access, and then the duct was opened and removed from around the local strands.

Resin grout anchors were then installed around the exposed strand prior to cutting them. This ensured that the PT tendons remained anchored at both ends and the structural integrity of the beam was intact. The removal of part of the post-tensioned concrete beams could then take place.

Carbon fibre-reinforced polymer (CFRP) was then wrapped around the beams to accommodate increased shear loads with additional CFRP laminate strips to enhance the longitudinal bending strength. 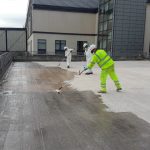 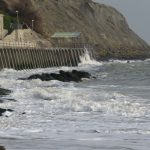