Gunite (Eastern) Ltd was contracted by the University of Birmingham to carry out the concrete testing and the subsequent concrete repairs and application of protective coatings at Shackleton Hall over three phases.

Shackleton Hall is used for student accommodation, student meeting rooms, cafe, restaurant, bar and offices and was occupied throughout the works.

Internal and external concrete repair to stairwells and staircases were also undertaken as well as localised brickwork repairs and re-pointing and repairs to flat roofs and to projecting bay roofs including enlarging rainwater outlets.

All works were carried out by Gunite’s highly trained, skilled and experienced operatives and a 15-year Sika warranty provided for the concrete repairs and coatings. 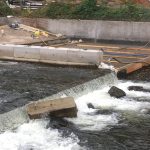